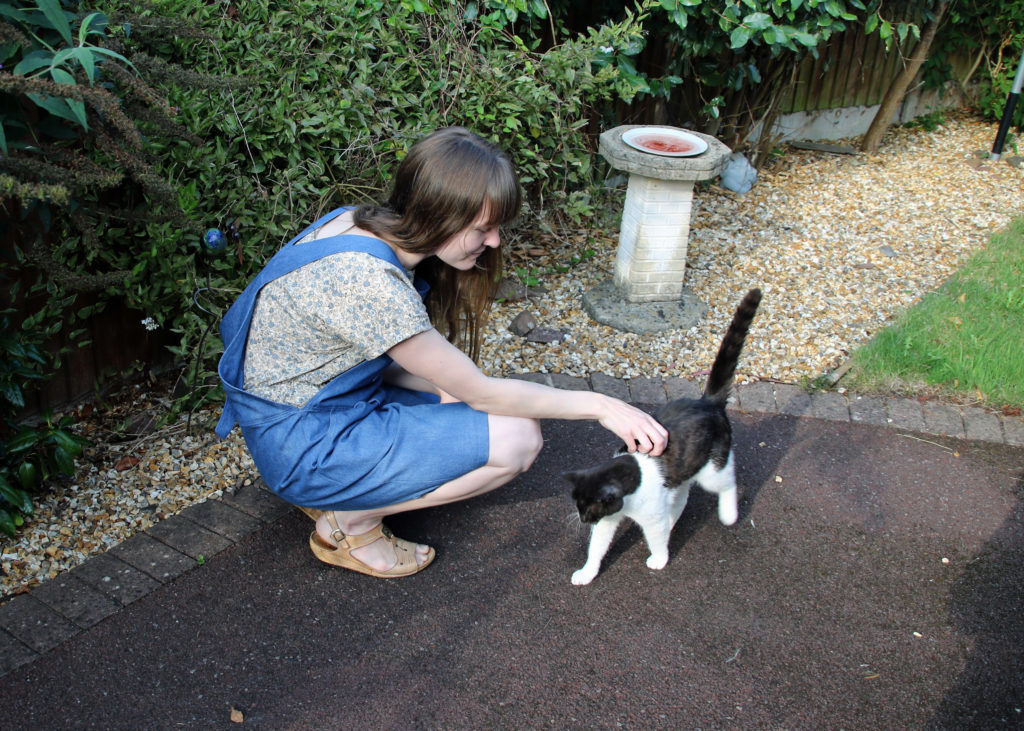 When I took part in the #miymarch16 instagram challenge, I put down this dungarees pattern as my sewing ambition (new Burda 3779).  I bought the pattern from a charity shop for £2 just over a year ago because I loved the idea of making some, and bought some denim shortly after.  However, the amount of pieces in the pattern felt overwhelming, and I couldn’t get started.

A couple of months ago, I asked my mum if I could bring along the pattern and fabric when I visited her to see if she could encourage me to get started.  Over the weekend, I managed to trace the pattern, pin it onto the fabric, and then cut it out.

One of my main worries was altering the pattern to my size.  However, we decided that as it was designed to be very loose fitting, I could cut it a size smaller than usual, which would ensure that the bottom half would not be too baggy!

I didn’t manage to pick it up again for about a month after this visit!  Feeling that I still needed a boost, I went back to my mum’s for a crafty retreat to get the pattern finished.

It wasn’t as bad as I thought it would be.  When I attached the bib section to the shorts, it didn’t provide a completely sealed finish, but I think I might have misread it.  I would plan to take steps to create a better finish next time.  Also, the inner sides of the bib are tacked in place and then secured by edge stitching and top stitching.  However, I decided to slip stitch it in place by hand to secure it before the two rows of machine stitching.

The braces were simple to attach.  The buttons have to be hammered on, but in my view, this is much easier than stitching button holes and working out where to place the buttons on the straps!  There’s the added benefit that you can adjust it to size.

The pleats on the front were also a worry, but turned out to be really simple to complete.  They were more like tucks.  The denim material is so sturdy that it was easy to tack in place and press well at every step.

I think these may become my ‘uniform’ for craft days!  I think I will have to make a trouser version for the winter though (I’m already imagining some navy polka dot material which could be used for the second pair…)

Harry did become jealous of the sewing project during its production, and kept sitting or laying on the instructions.  When I moved the instructions out of the way so he couldn’t make any further holes in it with his claws, he decided to settle on the garment instead!

It's a bear grid! Making another waterproof sittin